For some, running a restaurant is a business. For us, it is our calling. Our passion for food and fine dining comes first, business second. We are a chef-driven restaurant. For you, that means fine dining at its best. We invite you to join us for an unforgettable culinary experience. 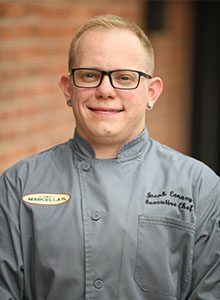 Chef Jacob Canary returns to Marcella’s Short North as the executive chef after first starting with the restaurant in 2013. Shortly after joining the Cameron Mitchell Restaurants (CMR) team, Canary was selected to assist with the opening of The Guild House in the Short North, acting as the lead trainer for the culinary team.

Once the restaurant opened, Canary gained valuable experience as a sous chef at Lomonico’s in Downtown Columbus, before returning to CMR. He joined the culinary staff at The Barn at Rocky Fork Creek where he worked as a sous chef for almost three years. Canary was a key contributor to The Barn’s success and was part of the team that helped the restaurant win the Taste of New Albany in 2018. In June 2019, Canary returned to his roots when he was promoted to executive chef at Marcella’s.

Canary learned of his love for the kitchen after baking cookies and other desserts with his grandmother when he was a child. Today, Canary practices all cooking styles, including homemade pastas and meats on a charcoal grill.

He believes that all chefs need to stay true to themselves and enjoys building his peers up to achieve greatness.

“You get to where you are because of who you are; never forget that,” said Canary. “It is going to take a lot of long hours, sweat and even tears, but you’re capable of amazing things.”

In Canary’s kitchen, you will always find garlic and onion. He believes everything starts there no matter the style of cooking. He also cannot do without a well-made rubber spatula and tongs.

Outside of work, Canary enjoys walking his dogs, playing Dominoes and Yahtzee, and spending time with his fiancée.

A note for our Short North guests…

To serve as many guests as possible in the safest fashion, we have limited our dining periods to two hours on our patio and at our window seating.  We appreciate your understanding and look forward to seeing you soon!